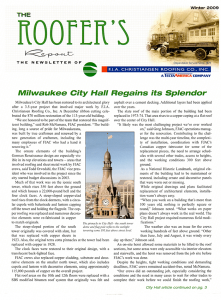 The newsletters are widely distributed to FJA Christiansen Roofing’s clients, vendors and prospects.

The newsletter articles position FJAC as the preferred source of industrial roofing and roofing service in southeastern Wisconsin — especially for landmark buildings and complex roofing systems.

The 20th anniversary project included extensive research and interviews, and creation of an in depth story about the company’s founding and growth that is being used for a wide variety of marketing and promotional purposes.