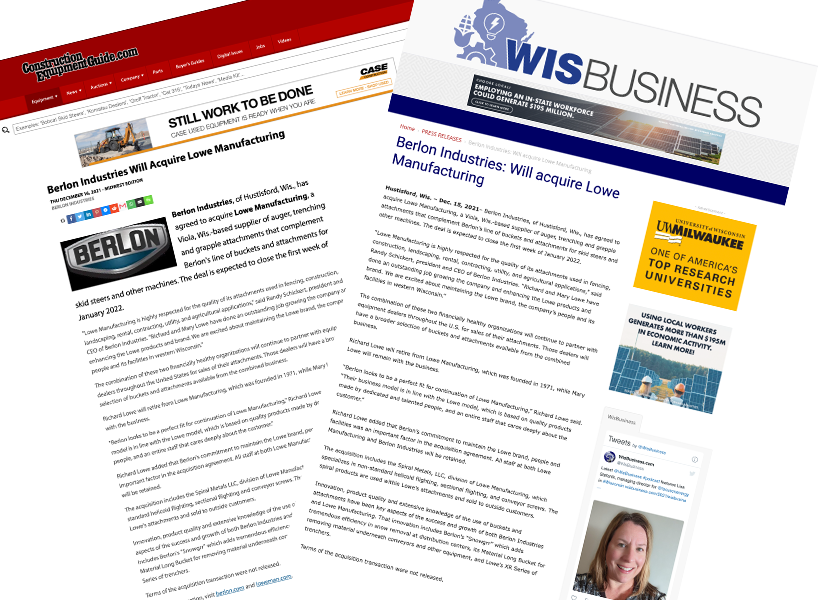 Berlon Industries, a manufacturer of buckets and attachments for skid steers and other wheeled and tracked machines, planned to acquire another attachment manufacturer.

Berlon turned to PKI Digital Marketing, which has provided a wide variety of branding, consulting, strategic marketing and PR work for the company, and which has extensive experience in the material handling sector.

After discussions with Berlon leadership, PKI Digital Marketing developed a public relations plan that included internal and external communications. A timeline of activities ensured that key audiences were informed of the news prior to widespread dissemination. The plan also included contingencies on steps that could be taken if the news was leaked prior to the desired date.

After the initial stages of internal and key customer announcements, including email messages crafted by PKI Digital Marketing, the news was posted on the websites of both companies. PKI Digital then distributed a news release that it crafted, initially sending the press release to local media and trade media, with personalized messages to each editor or reporter.

That was followed up with wire service distribution to national media, and to additional trade media in targeted sectors. PKI Digital also crafted wording for posts on social media of both companies. All announcements and social media posts were written to direct readers to the Berlon and Lowe websites, where the full announcement could be read.